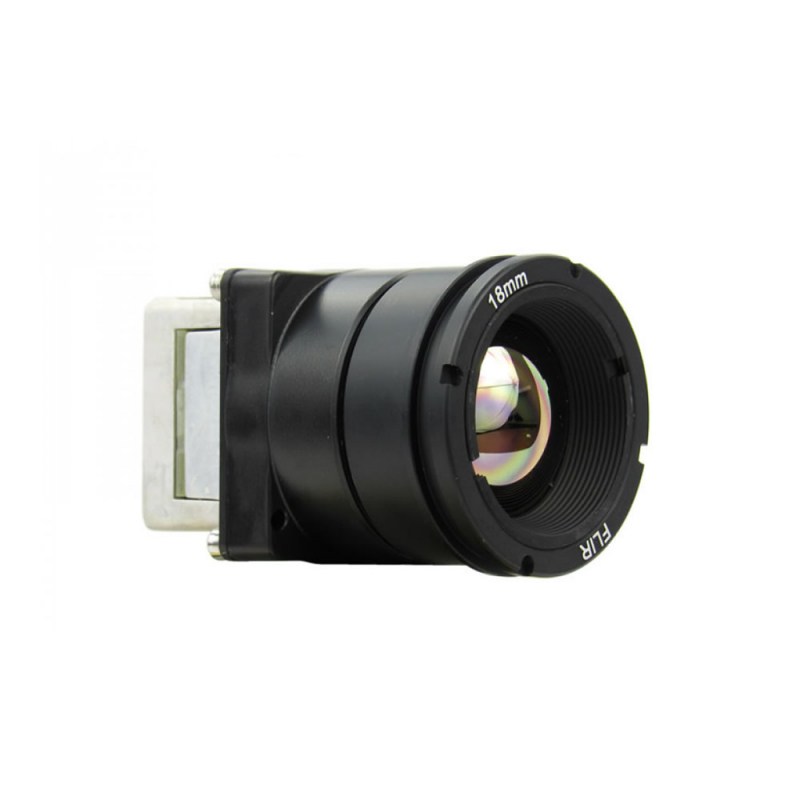 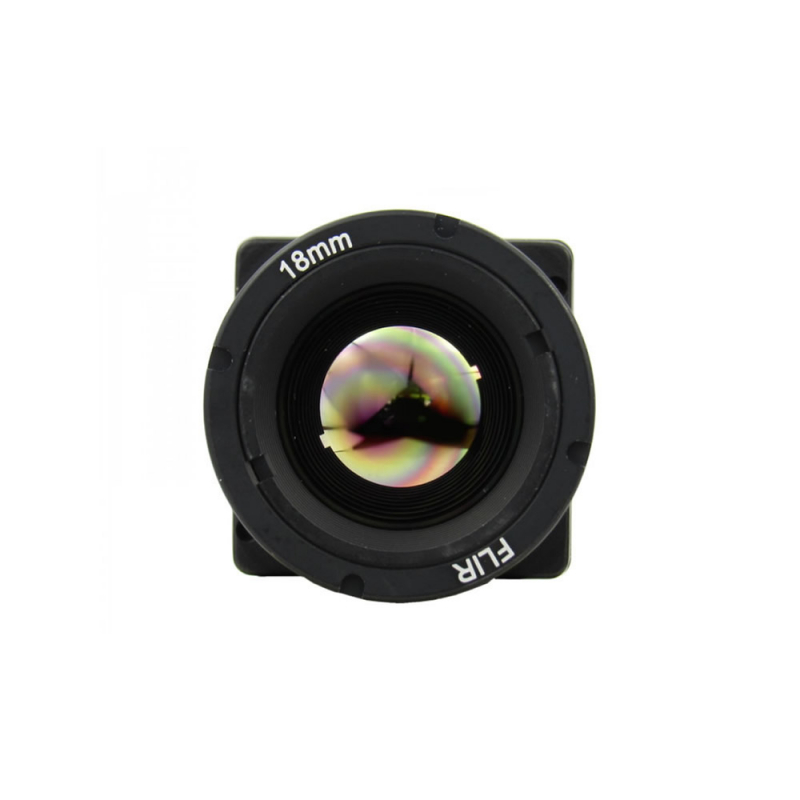 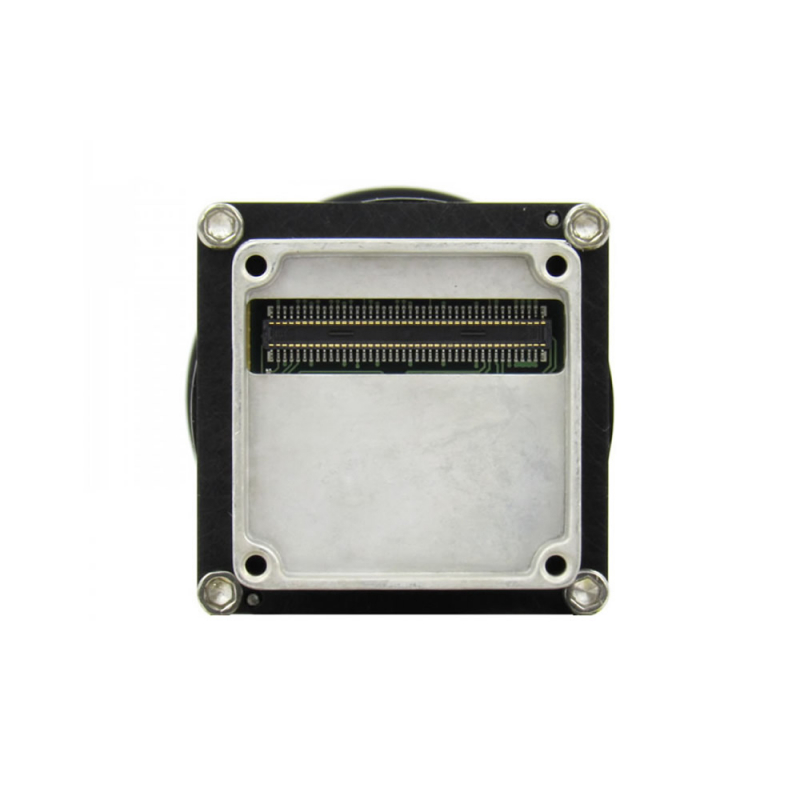 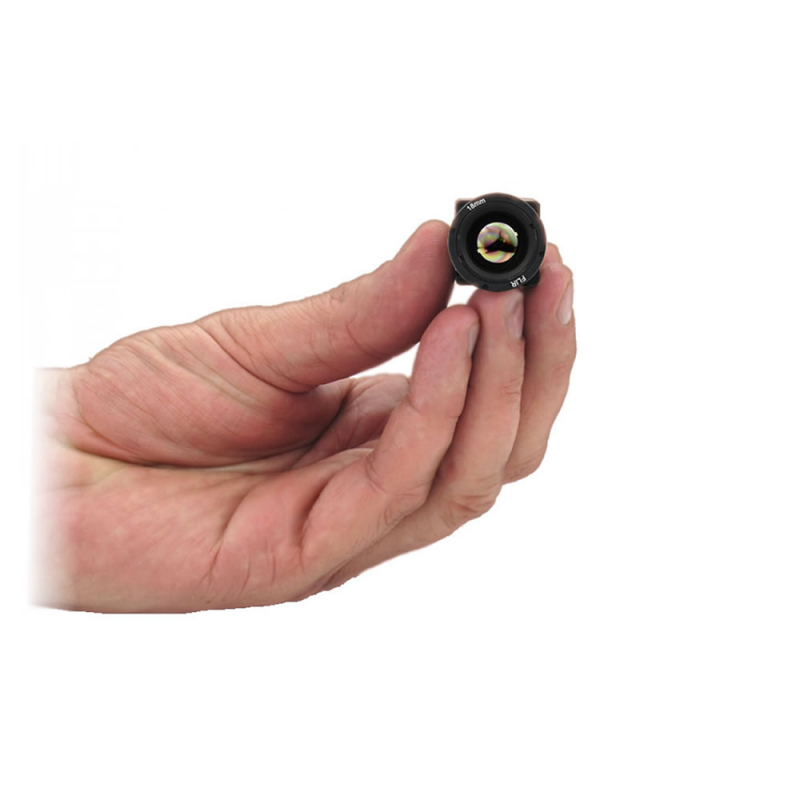 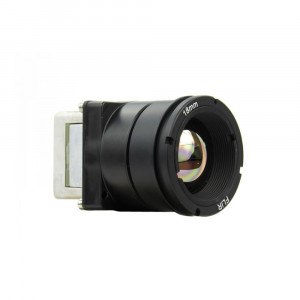 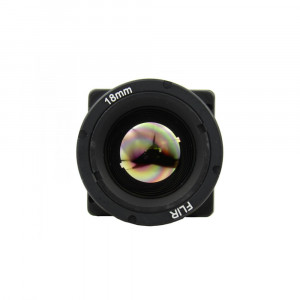 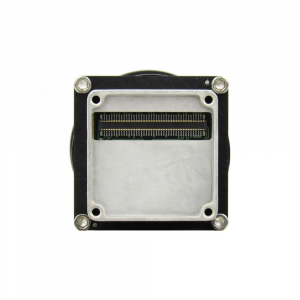 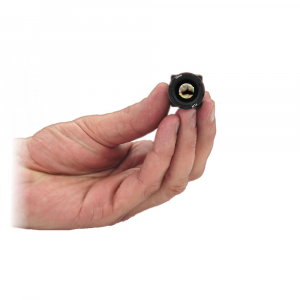 Teledyne FLIR Boson Lens Focus Tool
The focus-tool accessory, allows any FLIR Boson lens which cannot be focused by hand to be focused by engaging the appropriate slots on the lens barre..
$64.00
Add to Cart
Add to Wish List Compare this Product
Ask a Question
Quickview

Teledyne FLIR Boson Tripod mount
Boson Tripod Mount The Tripod-mount accessory, provides a means to mount a Boson assembly (or a Boson configured with either the VPC Accessory or t..
$53.00
Add to Cart
Add to Wish List Compare this Product
Ask a Question
Quickview

NEDT (noise equivalent differential temperature) is the key figure of merit which is used to qualify midwave (MWIR) and longwave (LWIR) infrared cameras. It is a signal-to-noise figure which represents the temperature difference which would produce a signal equal to the camera’s temporal noise. It therefore represents approximately the minimum temperature difference which the camera can resolve. It is calculated by dividing the temporal noise by the response per degree (responsivity) and is usually expressed in units of milliKelvins. The value is a function of the camera’s f/number, its integration time, and the temperature at which the measurement is made.

In general, thermal cameras operating at 60 fps and/or 30 fps (NTSC) or 50 / 25 fps (PAL) video rates are export-controlled by the U.S. government.

The FLIR OEM camera modules - including Tau2 640 (both 60 and 30 fps), Tau2 336 — are classified as dual-use items and require export licenses from the U.S. Department of Commerce.

Boson 640 (60/30 fps) and Boson 320, are controlled to the ITAR, and require export licenses from the U.S. Department of State prior to delivery outside of the U.S. or Canada.

NEdT (noise equivalent differential temperature) is the key figure of merit which is used to qualify midwave (MWIR) and longwave (LWIR) infrared cameras.  It is a signal-to-noise figure which represents the temperature difference which would produce a signal equal to the camera’s temporal noise.  It therefore represents approximately the minimum temperature difference which the camera can resolve.  It is calculated by dividing the temporal noise by the response per degree (responsivity) and is usually expressed in units of milliKelvins.  The value is a function of the camera’s f/number, its integration time, and the temperature at which the measurement is made.

FLIR 320x240 60Hz and 30Hz Fast-Video and 640x480 30Hz Fast-Video (>9Hz) uncooled LWIR Thermal Camera Core products are export controlled and require validated export licenses from the U.S. Department of Commerce prior to export or re-export outside of the United States to certain countries.

Strategic Trade Authorized (STA) Countries are an exception. In circumstances whereby "RHP International" delivers a camera to a customer in the U.S. who intends to export or re-export the FLIR camera outside of the United States, whether or not the camera is integrated into another product, it is the customer’s responsibility to apply for the required export license from the appropriate department of the U.S. government. Diversion contrary to U.S. law is prohibited.

The Export Conditions page details information regarding what countries thermal cameras can be exported to.

With a weight as low as 7.5 g and a camera body as small as 21 x 21 x 11 mm, the Boson represents an industry-leading reduction in SWaP with no reduction in performance. Advanced embedded processing and video analytics, as well as software-customizable functionality, give this small camera big capabilities, including integration with auxiliary sensors such as third-party cameras, GPS, and IMU. 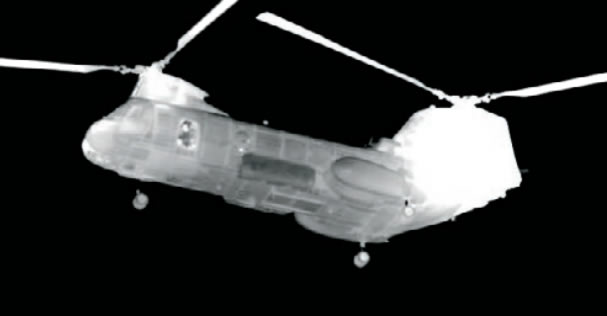 A full-featured VGA thermal camera module at less than 4.9 cm3. 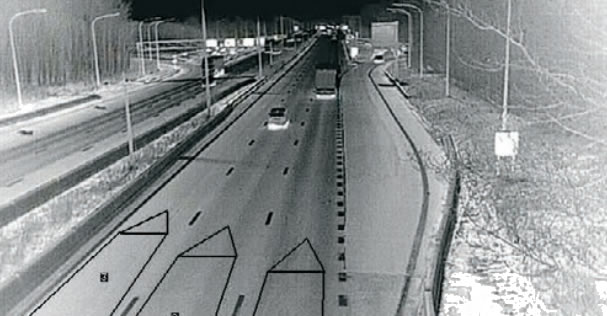 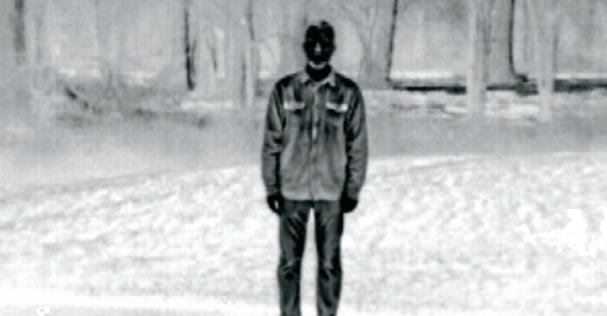 What is the difference between the FLIR Boson Consumer, Professional and Industrial versions?

The table below shows sensitivity as a function of configuration, normalized to f/1.0. The specified requirements are when operating in the high-gain state at 20C, with the averager disabled, in free-running mode, imaging a 30C background. (NEDT values with averager enabled are approximately 20% lower than shown in the table.)

For the 640 configuration, NEDT requirements in low-gain state 300% of the values shown in the table.

NEDT values shown are acceptance-test limits representing the lensless configuration with an f/1.0 aperture installed. With a lens installed, test limits are scaled by (f/#)2 / τ

What accessories are necessary to use the FLIR Boson Thermal Imaging Camera?

The FLIR Boson requires at least one interface board to allow Power and acquire Video from it's high-density connector.

The most popular board in our product list is the Low Profile VPC module. It allows for power input, streaming USB and composite analog video as well as controlling the cameras settings.

A complete list of accessories are available at: https://www.oemcameras.com/boson_accessories.

What is the best way to determine the FLIR Boson Field of View for my application?

To choose the proper FOV and resolution we recommend the Field of View tool here: https://www.oemcameras.com/fov_tool

What software application works with the FLIR Boson?

For video acquisition and control you will need to use the Boson Controller GUI 3.0 available from Teledyne FLIR.

How can I determine which FLIR Boson lens version will work best for my application?

There are three variables that need to be known in order to determine the most appropriate lens for an application:
1. The distance from the camera to the object being imaged. This is usually expressed in feet or meters.
2. The size of the object being imaged. This is usually the largest dimension, also in feet or meters, as long as the same units are used.
3. The number of pixels that the object needs to cover in the image, usually using the larger of the horizontal or vertical dimension.
Using these variables, it is possible to calculate the optimal lens, since the sensor resolutions and pixels sizes of Boson or Tau2 cameras are known values.
Note that these calculations become less accurate at very close ranges, or for very wide field of view lenses.
We have implemented a simple form to help you choose the right lens. To open, click the button below
Open

What is the Difference in the Boson Radiometric vs Non-Radiometric Versions?

Boson Radiometric cameras bring absolute temperature measurement capabilities for quantitative assessment and analysis across commercial and industrial uses. The Boson Radiometric models feature radiometric temperature measurement, meaning the cameras capture the temperature data of every pixel in every frame of a scene. This makes them ideal for implementation with unmanned aerial systems, firefighting, automotive, security, surveillance, and industrial inspection.

Configurations of Boson which are radiometric capable feature the ability to output a “temperature stable” output or a “temperature linear” output. In the former case, the 16b output is intended to be linear with input flux (i.e. target irradiance) and independent of the camera’s own temperature. In the latter case, the input flux is translated to absolute temperature (Kelvin). That is, the output is linear with scene temperature. For temp-linear output, parameters such as target emissivity atmospheric transmission can be adjusted to reflect current imaging conditions.

Radiometry Disabled (T-linear Enable/Disable has no effect on output): 16b output varies with both scene flux and camera temperature.

Radiometry Enabled, T-linear Disabled:
Temperature-stable output: 16b output value is intended to be proportional to scene-flux only and independent of the camera temperature. That is, when imaging a given scene, the output image is stable even if the camera’s temperature varies. By comparison, output varies significantly with camera temperature when radiometry is disabled.

Radiometry Enabled, T-linear Enabled:
Temperature-linear output: 16b output value is intended to be directly proportional to scene temperature. In high-gain state, the 16b output value corresponds to scene-temperature in Kelvin multiplied by 100, and in low-gain state, it corresponds to Kelvin multiplied by 50. For example, expected output in high-gain state when imaging a 20C BB is [(20C + 273.15)] * 100 = 29315. In practice, radiometric error prevents an output which corresponds perfectly with scene temperature.

Some of the benefits of advanced radiometric cameras include: 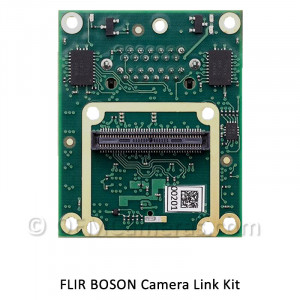 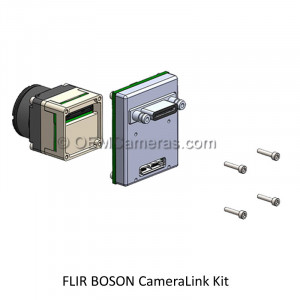 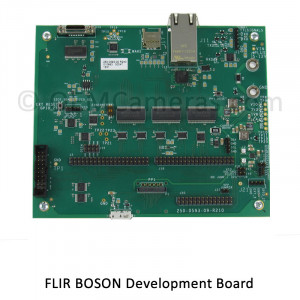 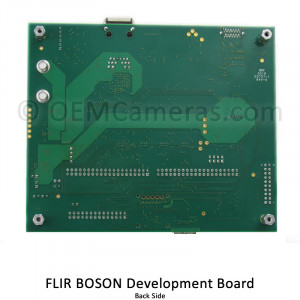 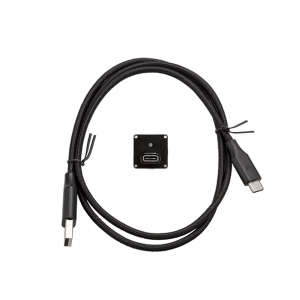 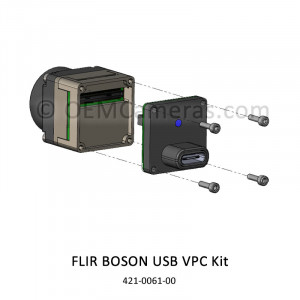